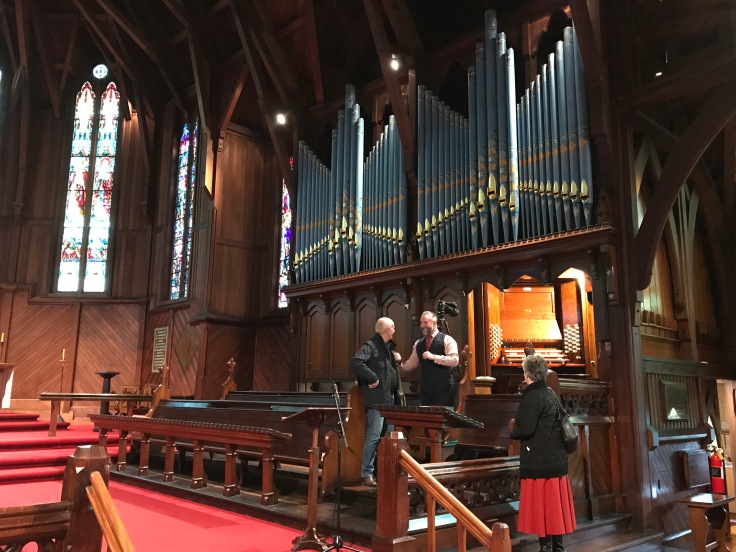 Last Sunday we went up the hill to an organ recital at the St. Mary’s Chapel, which is the old part of the Holy Trinity Cathedral (and also the part that moved across the street in the 1980s, and also the part that’s considered to be an exceptional example of wooden church architecture).

The organ was recently refurbished, including fantastic painted decoration on the pipes.

The organist Stephen Vincent, two-time President of the Auckland Organists Association and a former student of one John Carter (!), spoke with a clubby chuckle about the pieces on the program. Although I consider myself more or less musically literate, this was pretty much new material for me, and I was glad for his program notes.

The music itself was good, and several of the pieces seemed powerfully evocative… for instance the Louis Vierne piece seemed like archetypal haunted house music and made me want to design a video game so I could use it in the background. The actual execution seemed less good to me… lots of what sounded like missed notes , and a little too much fiddling with the many many stops on this 100-year-old contraption. Maybe that’s part of the appeal of an old organ: “look at how we can keep this crazy clockwork thing alive” as much as “listen to the harmonious sounds.”

Anyway, glad we went, now bringing to two the number of new cities we’ve moved to and gone to an organ recital.