About two hours before the race comes by, as a sort of warm-up act for the fans, there’s a parade! Major sponsors put cars on the road, dressed up as floats, and drive along the route playing music, and – most importantly – providing a way to throw trinkets and swag to/at the crowd.

With thousands or even hundreds of thousands of people lining the sides of the roads, often little tiny roads with nothing else available to do, the caravan plays an important part in each day’s festivities. All the excitement is, of course, completely artificial, manufactured. Nonetheless, it is exciting, and I found myself as swept up in it as any of the eight-year-old kids I had to jostle out of the way as we grubbed around for tickets.

Nobody in our group needed a flimsy hat, more refrigerator magnets, keychains with tiny flashlights, or the (admittedly delicious) little cookies and cakes that got tossed our way. However, the caravan is not about need… The caravan is about the hunt, the wanting, the scrambling. Of all of us, Manny was the most dedicated swag-grabber. However, I did my share, and ended up with a whole shopping bag full of stuff. And a few more shopping bags: another useful item they gave away. 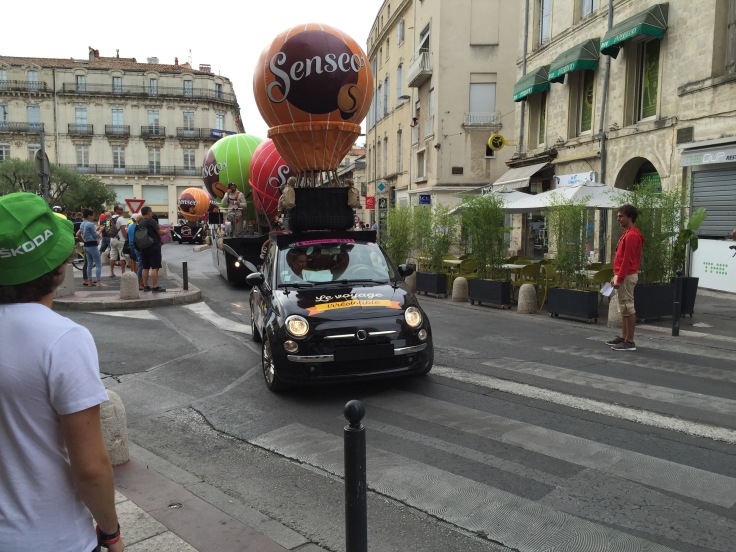 One of the most practical items being tossed out was little packets of laundry soap, and Vlad (who grew up in the post-war Soviet Union) was very crafty in grabbing several packets for us to use in our hotel room. The pretty girls (and boys, but mostly girls) who staff the float cars showed amazing energy… They were dancing and waving just as energetically when we saw them at the finish line as at the start: 4 to 6 hours of enthusiasm. Ugh.

There’s an art to the throwing of trinkets. On the one hand, you don’t want to put anyone’s eye out, so you have to throw low, at people’s feet. On the other, you have to reach the people who are in the second or third or fifth row back, so you have to wing some out overhead. We heard someone mention that 30 million pieces of corporate nonsense get tossed into the crowd over the course of a year. I didn’t hear about any injuries, but the company that threw little tiny salamis must worry about knocking someone’s drink out of their hand from time to time.

The bike-riding chicken was my personal favorite… One of several vehicles that this chicken nugget company had in the parade.

During one of our visits to the Departure Village area, I tried to get a picture with hot french fry girl, but she was busy on her phone… Maybe next year.