Tawapou Farm is my ex-boss Tom’s family place. A few years ago they decided to put the land into a conservation trust and (over a decade or more) restore the native plants that had been destroyed by 100 years of cattle and pine tree farming.

Now, they have a community planting day every year to further that cause. Tom’s brother, who runs a large plant nursery on the property, does all the prep work (including killing off all the existing grasses), and they put out the call for volunteers. We were replanting between a pretty little stream and a new road they’ve put in to get to the children’s homes on the coastal ridge.

The Orca Research lady had first world conservationist problems… she had to arrange special permission to park down by the work site because there had been an orca sighting in the bay and she was on call to rush off and document any repeats.

Tom’s partner Isabella’s daughter with her beau… is this a pose they might repeat some day???

I don’t know how many people actually showed up today… maybe 80-100? But many hands certainly lightened the work. We planted over 5,000 shrubs and trees in under three hours.

After, we were treated to a great lunch and a long talk about bird habitat management (which mostly means killing rodents by any means necessary).

We are sore and that will get worse tomorrow. But it was a fun morning of community and I think it will be a long-term memory of doing something that feels unequivocally “right.”

And then, the long walk from the hotel to the bar… life is good. 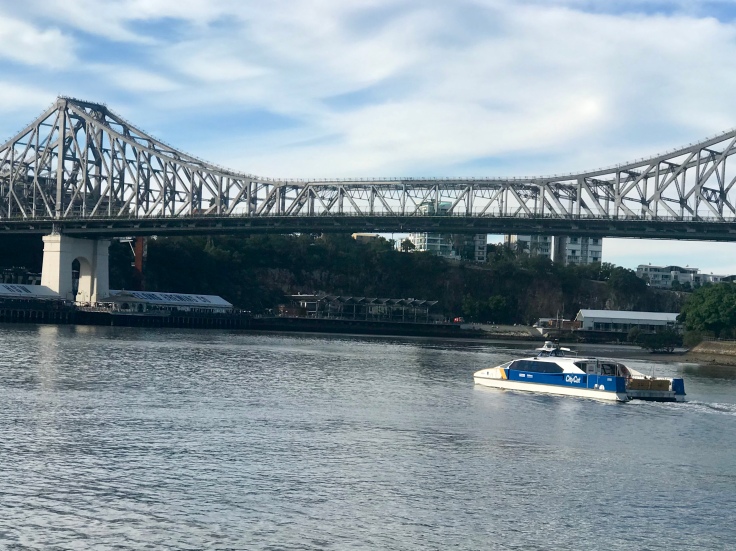 We turned a Thursday work meeting into a long weekend in Brisbane and had a lovely time.

About a dozen years ago, we flirted quite seriously with the idea of moving to Brisbane. The other course of action worked out just fine, but we’ve always wondered a bit about life in a sleek high rise overlooking the river. We almost got a taste of that at the Westin Hotel, where we stayed on some leftover Marriott points. The hotel was super-nice, as was the service. We enjoyed breakfast and happy hour in the concierge lounge, where we met various interesting people with stories to tell. Last night was crowded and we shared space with a couple whose summary included “I used to be in the casino game, in Macau…” We did visit the Brisbane casino, housed in the old Treasury Building, and managed to leave with as much as came in with, victory!

Now that we’re in Auckland, Brisbane doesn’t seem quite so exotic, but after spending a few days exploring (my third time, Lee’s first) we would still totally live here.

My meeting was in a nice hotel located just under the Depression-era Story Bridge, with a cool view.

We took the City Cat ferry (top picture) all the way up and down the river, a great $5 ride. Lee also took a guided river tour and shared the best parts of the commentary with me. 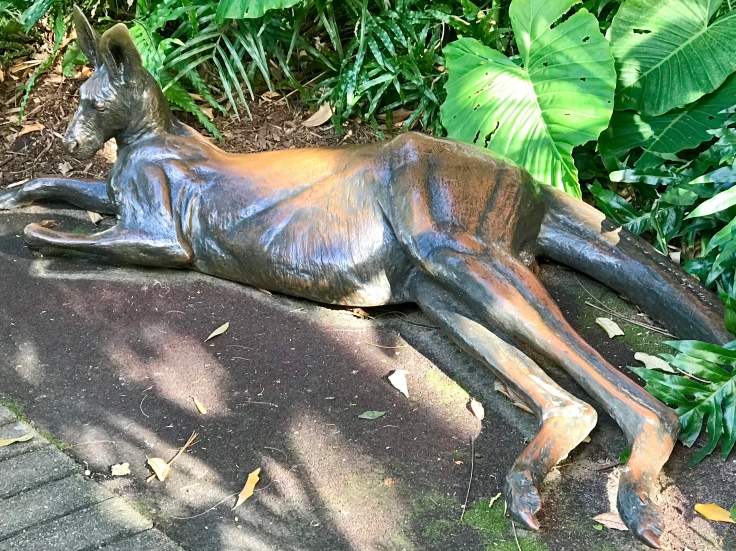 We took some nice walks along the river, including the South Bank that is full of attractions. Sadly, the free pool was closed for maintenance. But we did see the Peace Pagoda from Nepal, a leftover from Expo 88. The explanatory plaque says it’s one of only three outside Nepal and also says that there are Peace Pagodas all over the world. Go figure.

We ate good burgers at the Triffid, a well known live music venue. Lots of band posters everywhere, mostly unknown to me.

We saw a bunch of different neighborhoods. All nice. We especially liked the slightly funky West End, where many of the world’s gluten-free vegans seem to have congregated so they can open little shops and sell stuff to each other. We ran into a really impressive market there.

It’s a Kiwi cliché that we now believe, fresh produce is way cheaper here. Also gas. And real estate from what we saw. Hmmm, no wonder so many New Zealanders are moving to Oz.

There was a lot of public art…

That’s a scale model of the dome of a Cathedral that was contemplated for over 40 years, but finally the plans were abandoned for lack of funding. 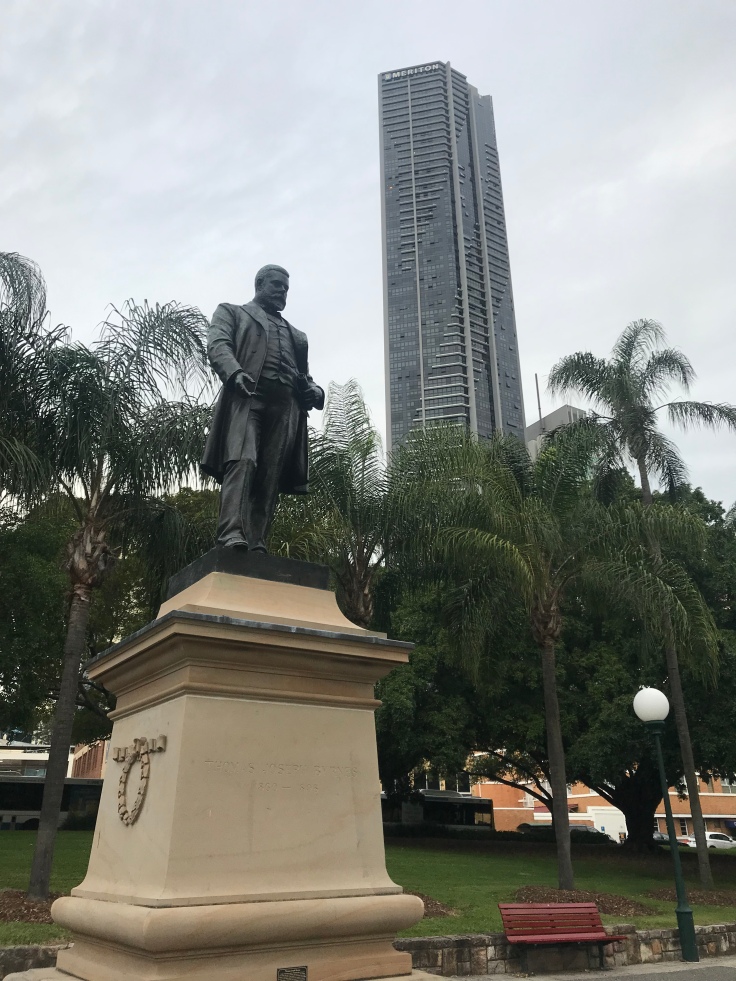 Statues of Byrnes and Burns, two men who accomplished a lot and died young.

I hope this carving, in the very posh part of the waterfront area, is called something like To Have and Have Knot.

We did an Asian food-themed walking tour, meh. They took us to a Filipino place we’d discovered on our own the day before… 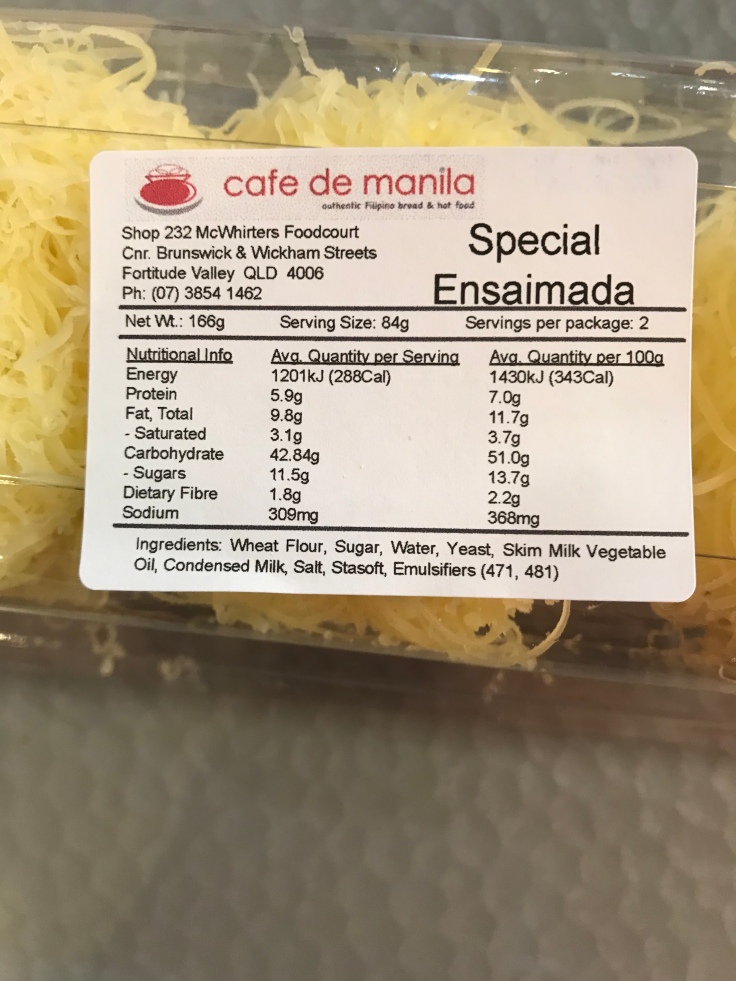 We also took in an improv comedy show that was truly remarkable in its amateurishness. 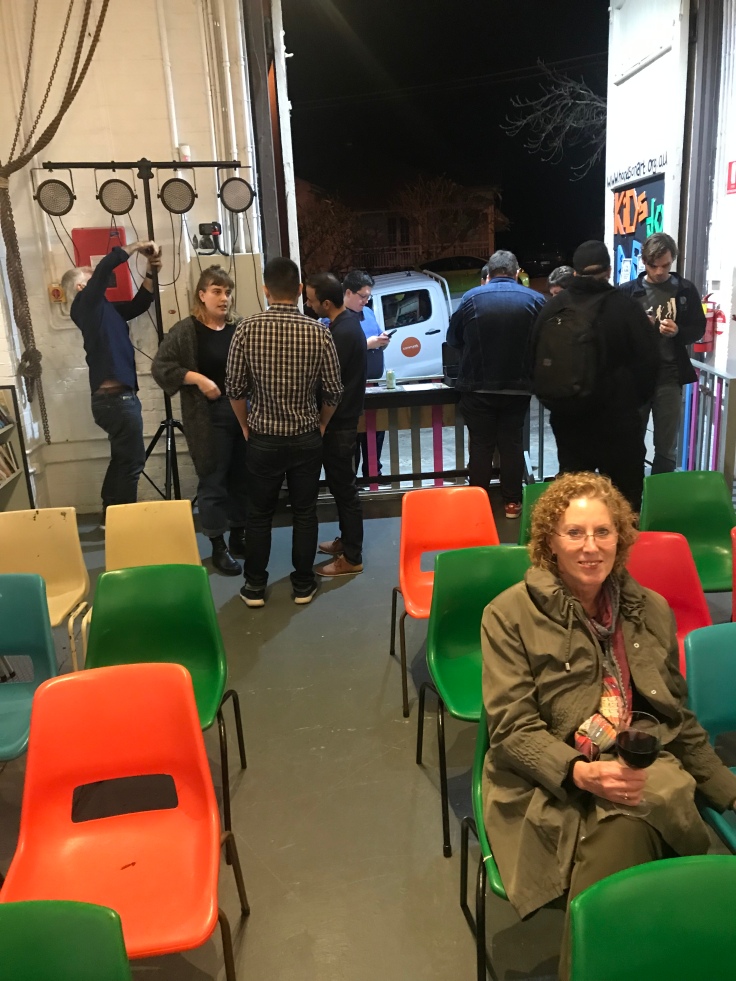 And then on the last morning, I wandered down to the finish line of the Brisbane Marathon in time to watch the winner roll in in a time of 2:33. That’s a hell of a lot faster than I could have ever run, and pretty good for a hometown white guy with a full time job. But in the running villages of the Kenyan highlands, I’m pretty sure kids that slow don’t get dessert.

I had a good time watching all the half marathon and even 10K finishers coming in… so many tales of agony and exhilaration and all sorts of other emotions on unvarnished display. 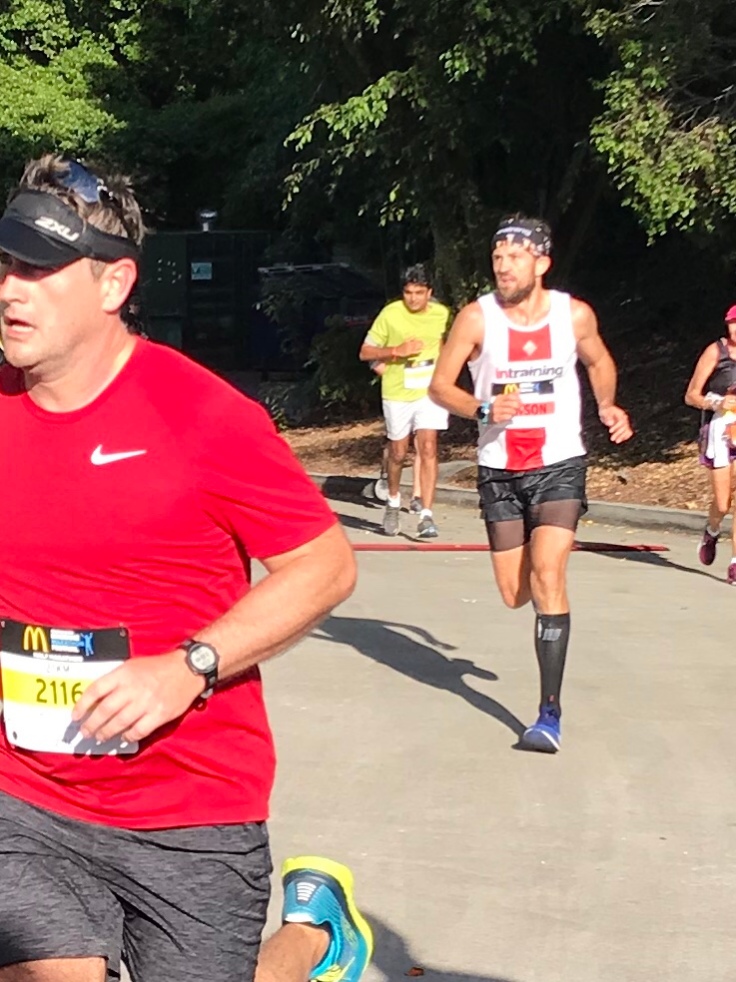 That’s the winner in the center. If he passes red shirt guy in the next 80 meters he’ll have run twice as far in the same time.

All in all, we packed in a lot and find ourselves tired and ready to go home. Tomorrow is Queen’s Birthday holiday so there’s a day to recover. But if duty ever called… a person could do way worse than Brisbane.

Jogged around this morning. After the earthquakes in 2010–2012, Christchurch was in shambles. The central city is still more vacant land than buildings. There is a lot of construction activity, but it all felt pretty small-scale. Still, NZ’s good economy is good here too, and I suppose recovery will happen as it happens.

The Bridge of Remembrance, a War Memorial.

One of the recently terrorized mosques, now guarded by a couple of bored cops and adorned with many floral wreaths. 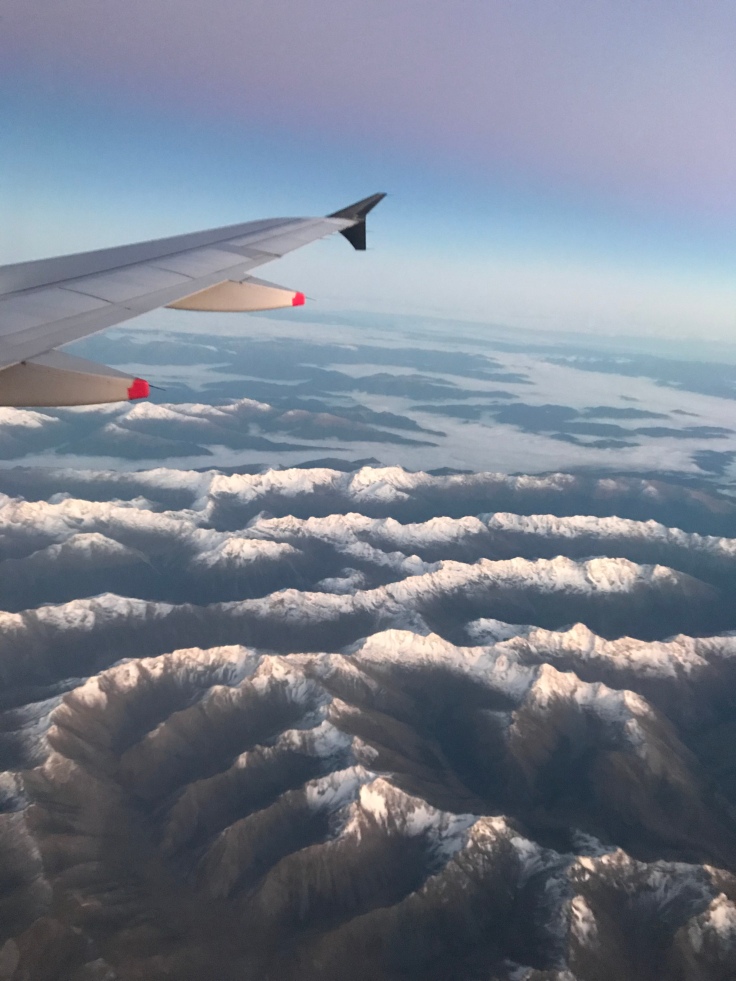 One of the people who also arrived early for this morning’s flight to Christchurch was Gwen, pictured above. She’d been traveling for 36 hours following a cruise in Scandinavia. Missed a connection. A bit wired up. Lost her luggage.

She’s written a book about her life, reviewed above. Does a lot of motivational speaking. She took my card and said she’ll send me a copy, here’s hoping! 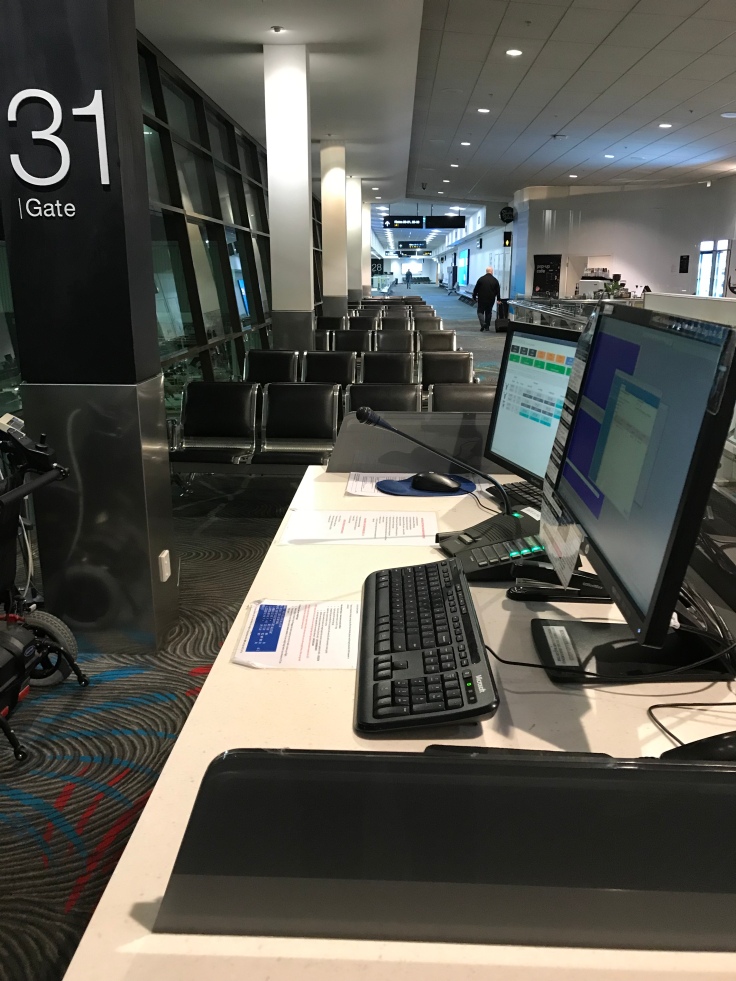 I arrived at the gate 1 hour 7 minutes before departure and was the first by quite a bit. Still not used to the casual approach to domestic air travel here… but it’s a good thing. 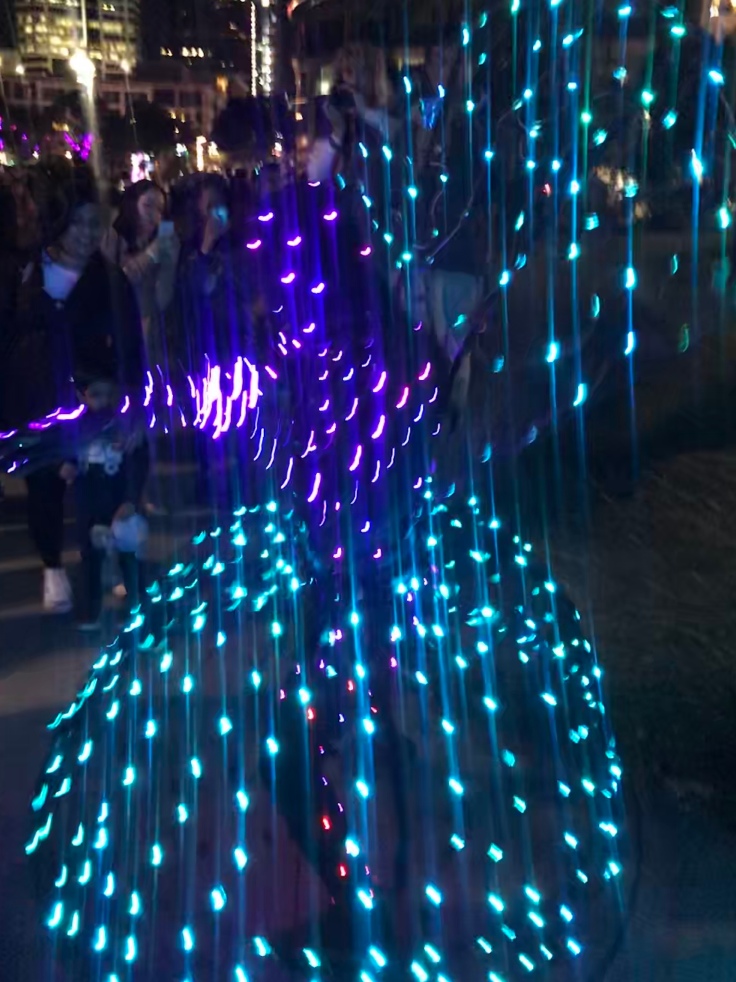 For Mother’s Day weekend the fine folks who plan this sort of thing put on an evening show of lighted-up stuff down by the Viaduct. I had jogged by in the morning and it looked like a thing to do so we did.

That’s a person in a lighted costume up above, who did a mesmerizing fairy dance that even managed to make lots of high fives look elegant and mysterious.

Thousands of other people also thought it would be a fun time! It was shoulder to shoulder. Some of the installations seemed pretty cool, like one that made noise when you touched it. But the artist’s vision might or might have included the reality we saw: 50 sticky overstimulated kids slapping as hard and fast as possible so all the sounds and all the lights.

The Harbour Bridge got in on the act.

This sculpture is actually there all the time but looked cool all lit up.

This Plexiglass tunnel boasted the most pretentious artist statement. Vitruvian Man, polygons, harmony, blah blah blah. But many many people lined up to walk through and experience the novelty of lights. And Plexiglass!

Many of the same sculptures will be on display in Parnell in July… maybe with a smaller crowd?

Got to go to Sydney a couple weeks ago for an HL7 meeting. Here’s a few shots. It seems like I always get to make a scenic approach over the Harbour.

The meeting was held in the very rarefied air of the KPMG offices. 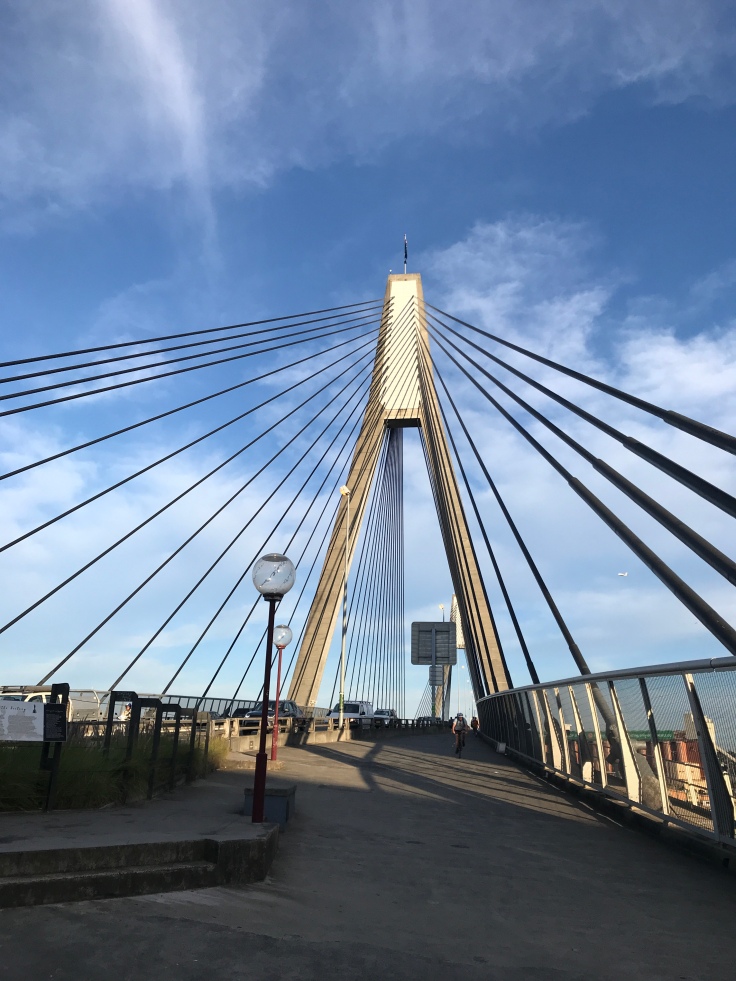 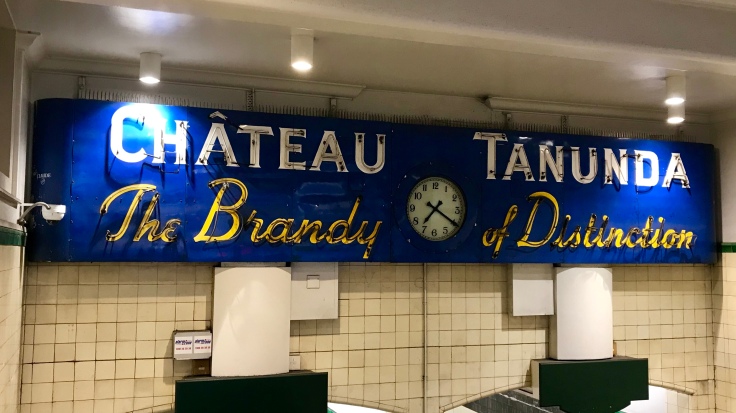 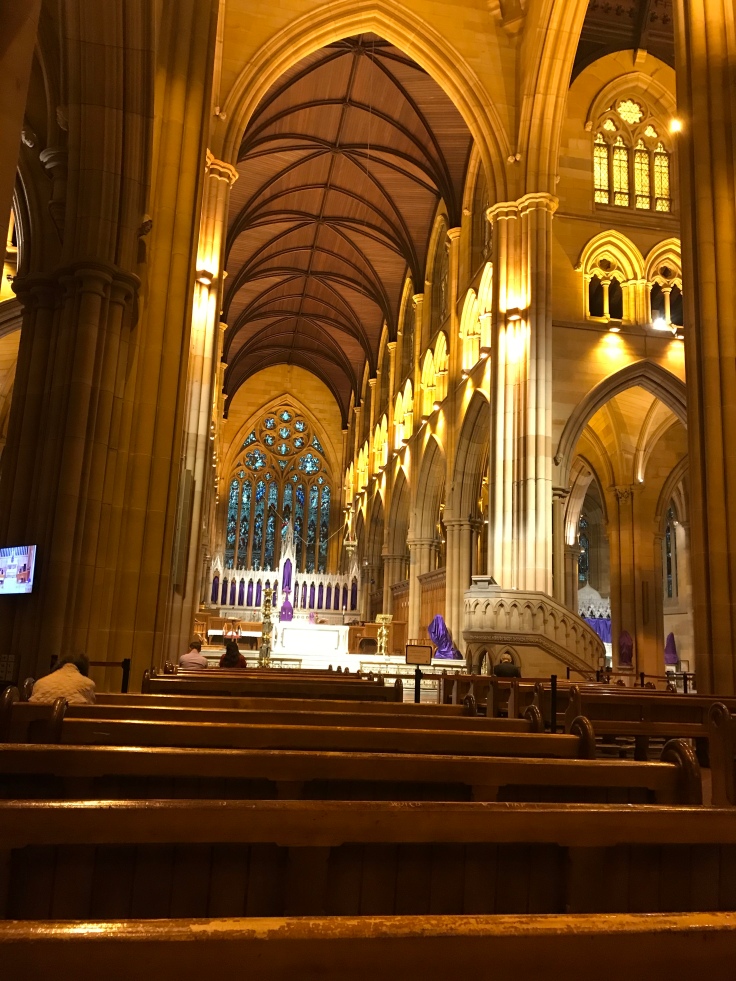 Random morning run pictures. It was very beautiful. There are some parts of business travel I miss, for sure.

But 48 hours later… home again. And I stop missing those parts.

We had a nice tour of Singapore’s giant garden domes. I think they have to keep the plants indoors because it’s too hot outside. 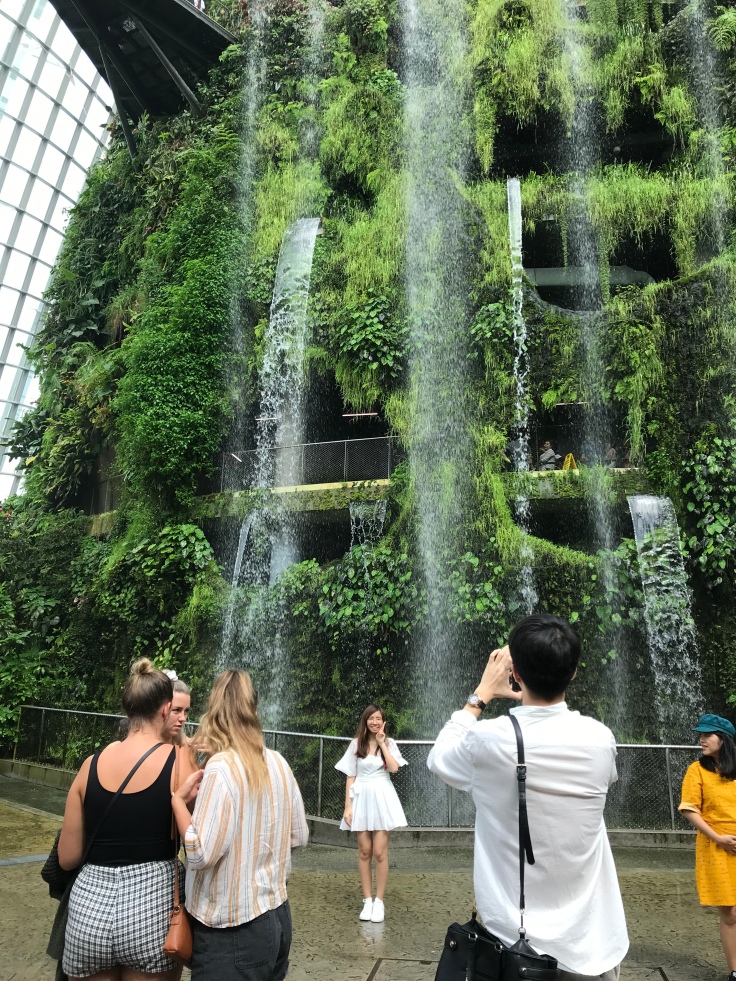 All the pictures above are things you’d expect to find in a botanical garden.

More surprising … downright surreal in fact… was the All-Stars of Cosplay convention. 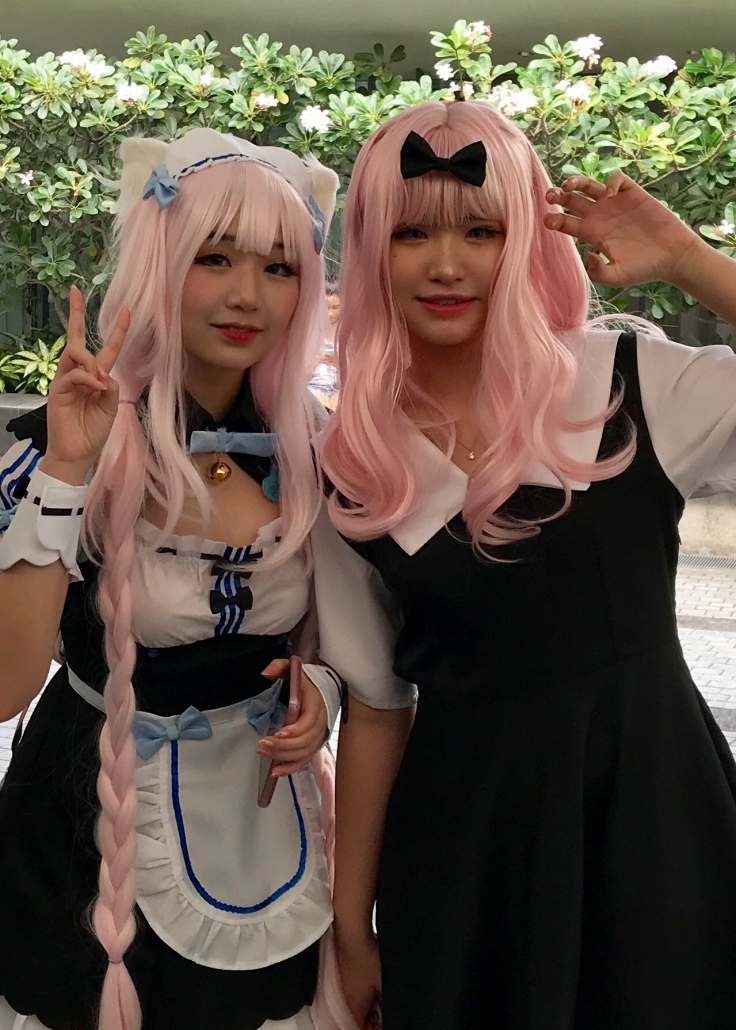 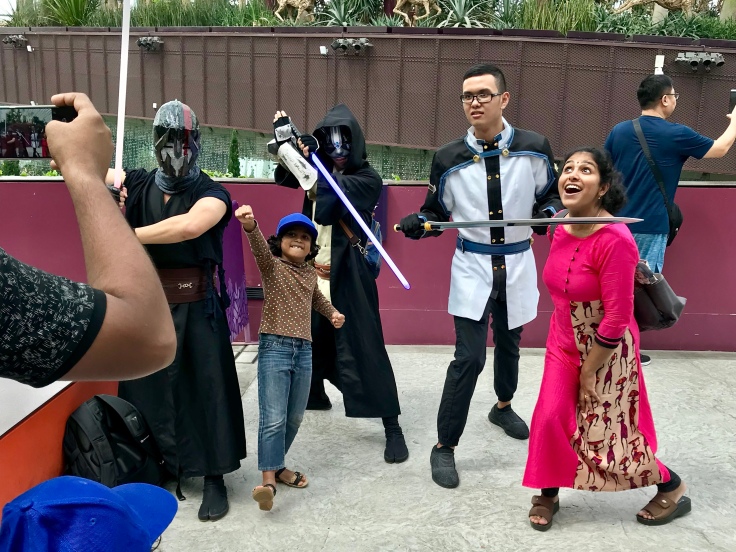 I am a little uncomfortable around a lot of this cosplay stuff, to be honest. But this family of tourists was all in and didn’t share my queasiness, and it was cool to watch mom and kid having such a good time.

I’ve done my share of consulting engagements where the deliverables were poorly defined, but this shop seems like it might be operating at a whole different level. 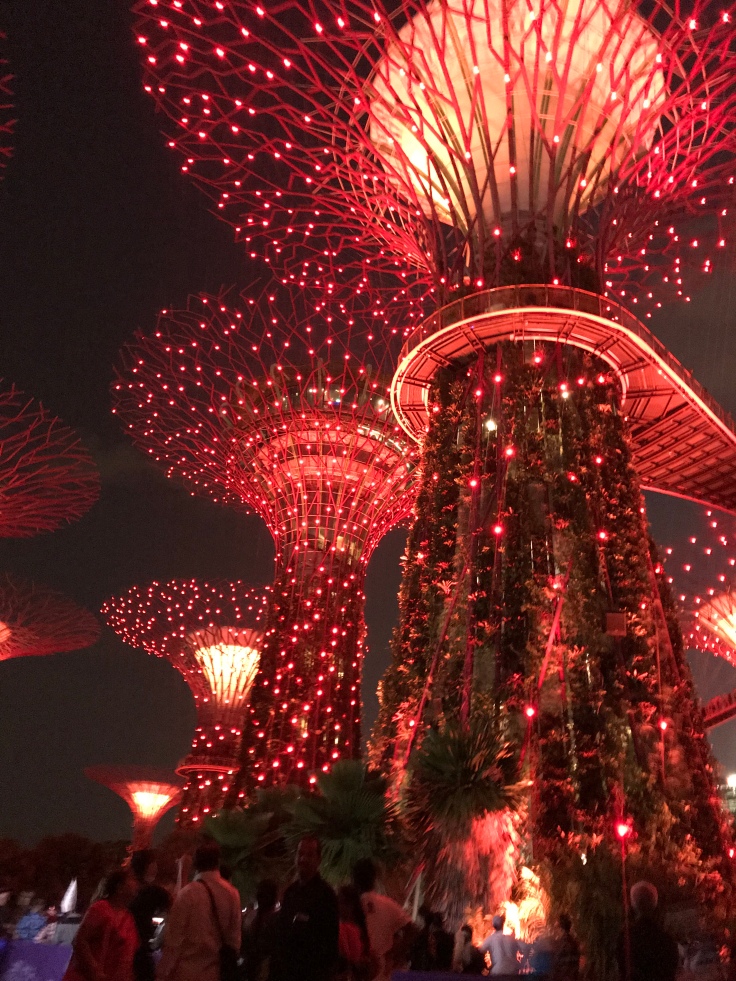 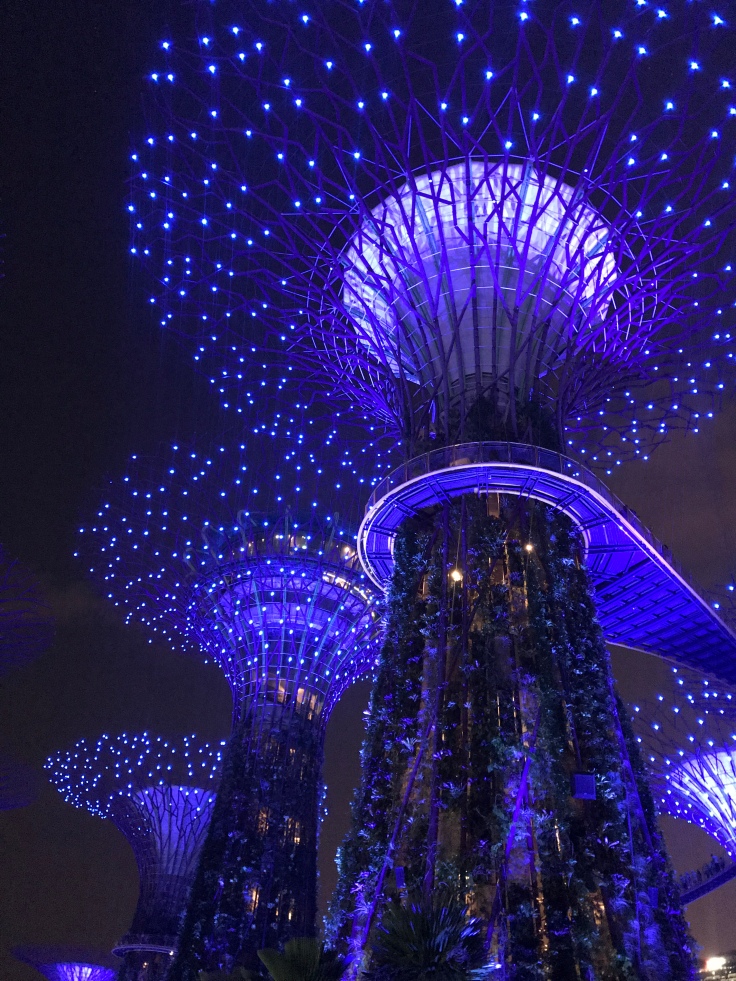 Adding to the feeling that Singapore is actually Disneyland, twice every night you can watch a fantastic music and light show at the giant tree sculptures. Just like Fireworks on Main Street USA.

It was amazing… maybe not breaking any new artistic ground with the classics themes and the flashing lights… but still, wow! 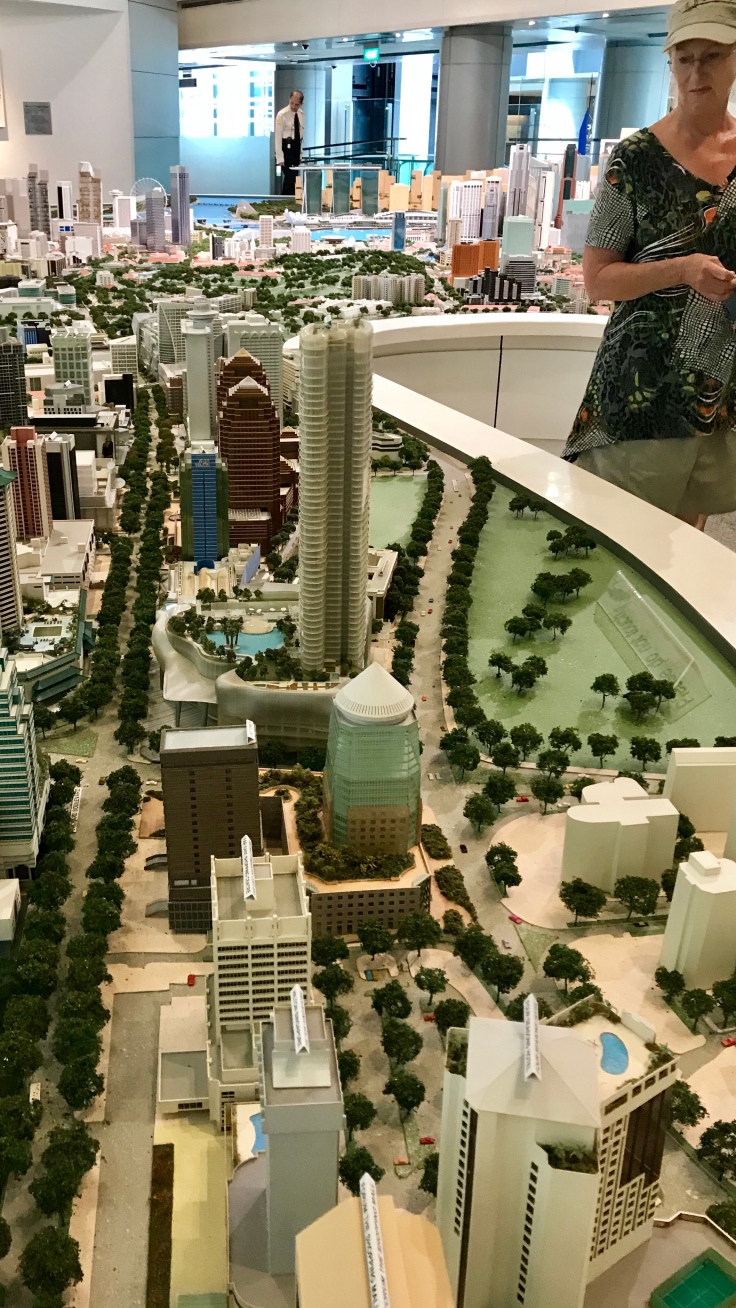 Worth a second visit for me, and a first for Lee who has always had a thing for scale models. 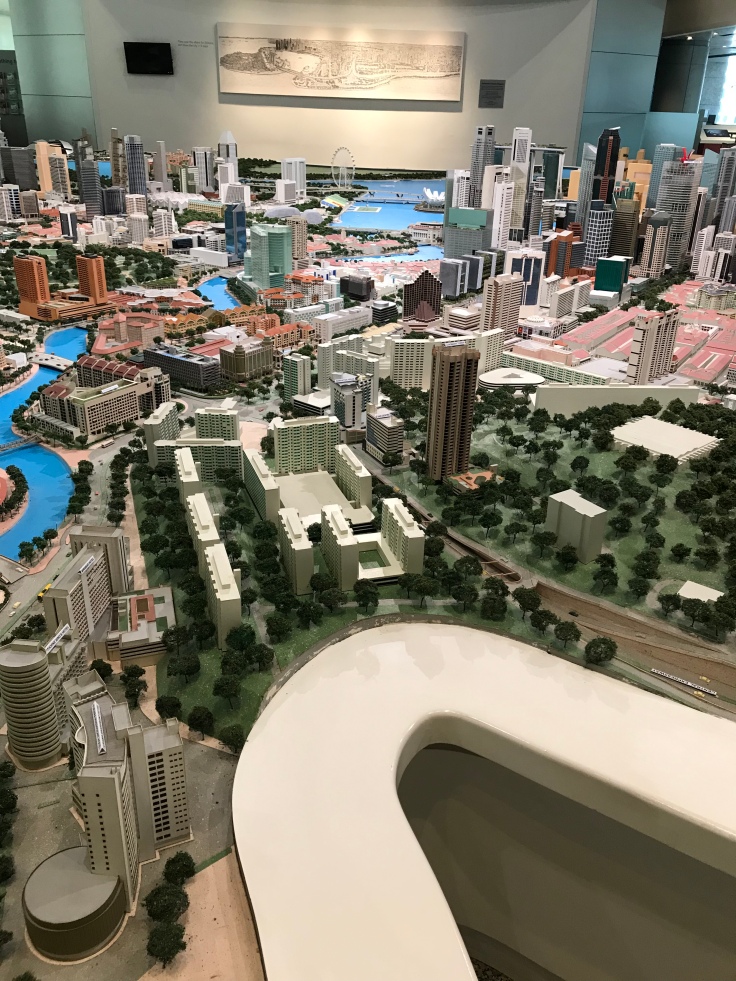 In addition to the big models, they had a lot of interesting propaganda/exhibits about all the clever things they’ve done to make Singapore as cool as it is. 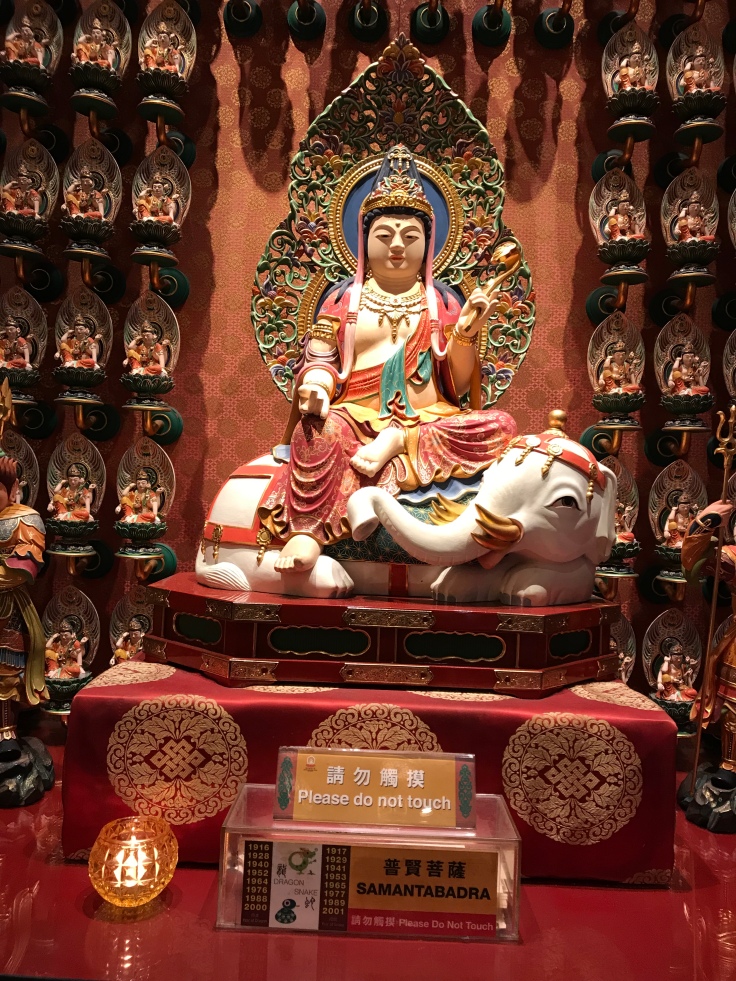 The Buddha’s Tooth Temple was far and away the most sumptuous temple we saw, or maybe have ever seen. Spectacular and also mystifying. How do you keep up with the hundreds of interconnected deities and practices and offerings? And why?

We ate and drank really well in Singapore. The giant food halls are the most exciting, with dozens of tiny stalls and communal seating. I love eating that way and would grow fat and hypertensive if I lived there.

I had a bowl of fish ball noodles soup for breakfast, an experience I don’t regret but wouldn’t necessarily repeat. 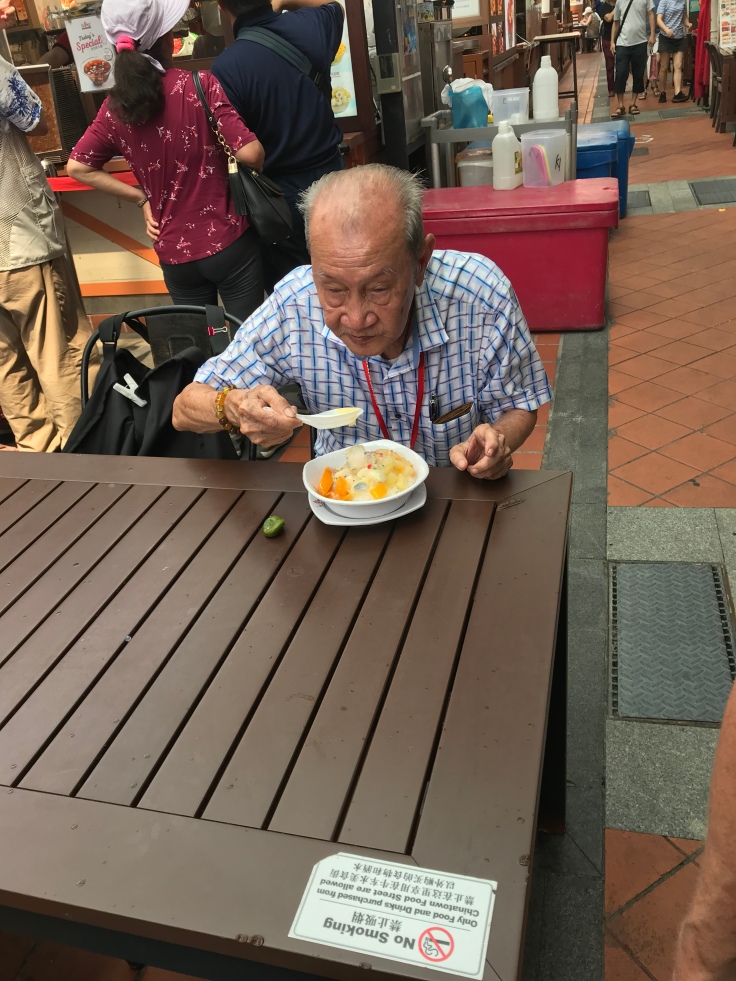 After seeing this guy tuck into a giant bowl of shaved ice, fruit, and custard goo, I ordered my own. Just right for a 95-degree day.

The famous Raffles Hotel bar is closed for renovations, so we settled for Singapore Slings at a waterfront tourist place… tasty but not the same.

Our whirlwind tour of Singapore was largely spent walking around looking at stuff, including a lot of big tall buildings…. here’s some pictures. 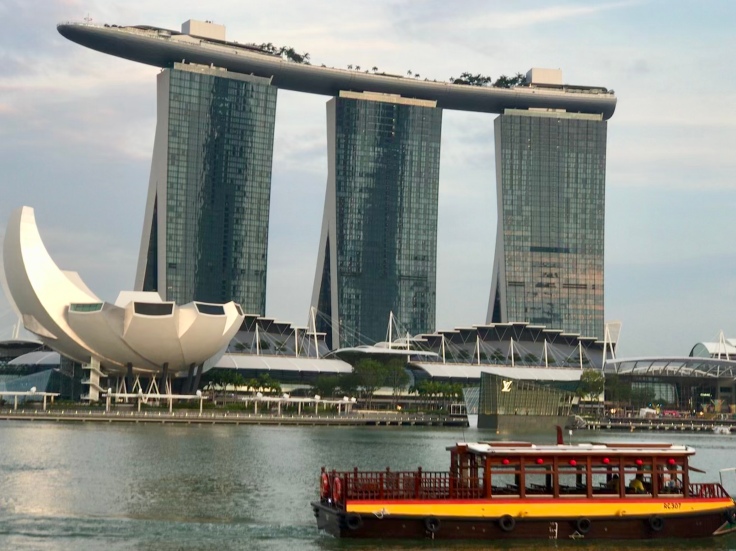 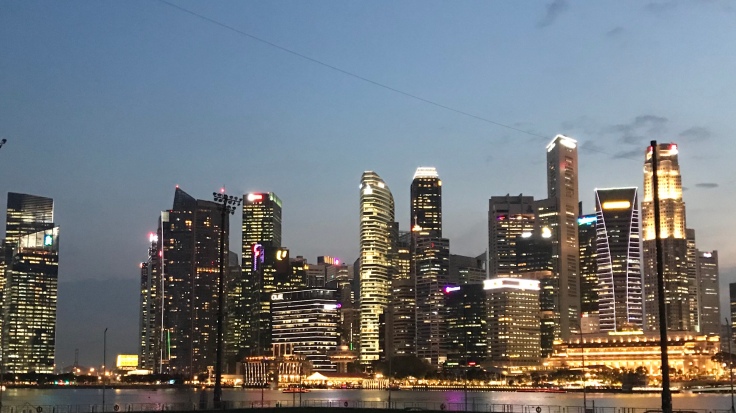 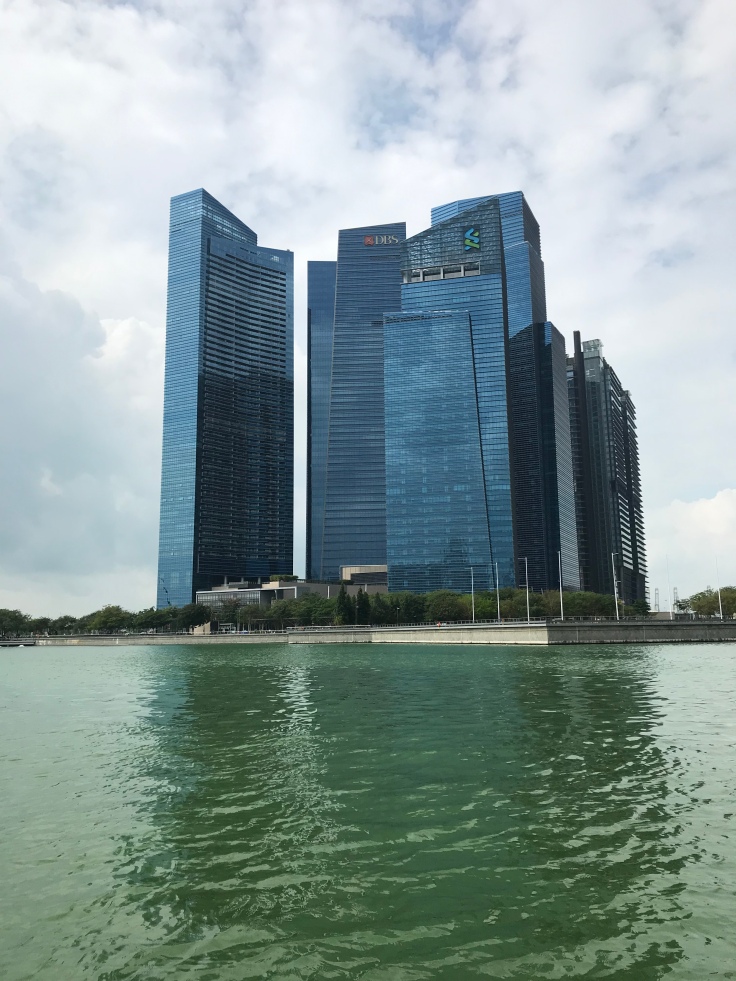